Wind, fire, all that kind of thing!

Earlier this year user AnonyMousse did an analysis of how the answer rate on Stack Overflow developed over time. This was prompted by the exodus of many high profile users after the social justice influenced changes to their Code of Conduct in late 2019. 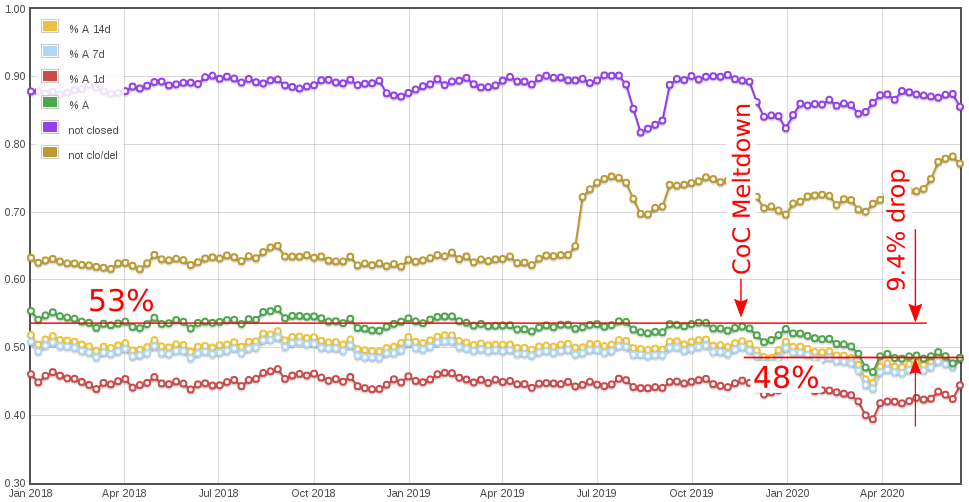 At the time it seemed like after an initial answer rate drop in November things went back to normal the next month. However, now (6 months later) the picture has become a lot clearer, and we can see that what looked like a recovery was only short-term, and the answer rate has indeed dropped significantly.

The rise in December 2019 was probably just the normal increase in activity that seems to happen at the end of every year, maybe supported by some new users trying to step up. But during the entire first quarter of 2020 there has been a steady decline in answers, even if we discount the downward spike in March that was most likely caused by the CoViD-19 pandemic.

The total answer rate (green line in the chart) has been relatively stable throughout 2018 and most of 2019 at around 53%. After the initial dip and recovery during Fall 2019 it steadily declined, until it stabilized again at around 48% by the end of March 2020. In essence that is a loss of 5 percentage points (or 9.4%) in answers.